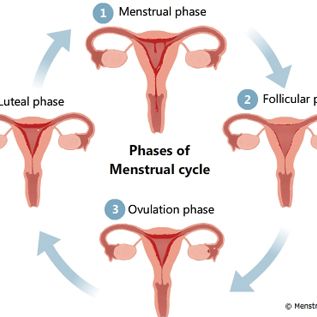 Menstruation is a part of the female reproductive cycle that begins when a girl becomes sexually mature at puberty. It is the periodic discharge of blood and tissues from the uterus. Cyclical changes occurring from one menstruation to the next constitute a menstrual cycle. Until menopause, menstruation occurs approximately every 28 ± 4 days (excluding the period when a woman is pregnant.)

The importance of menstrual cycle:

During the menstrual cycle, an egg is released from the ovary even as the womb (uterus) prepares itself for housing and protecting the resulting embryo, if this egg were to be fertilized by a sperm. If however, the egg is not fertilized, the lining of the womb (which was prepared in anticipation) is shed from the body as periods. The menstrual blood flows out from the uterus through its mouth (the cervix) and out of the body through the vagina.

The menstrual cycle is unique because it limits the fertility of a woman to the specific period of ovulation. (Production of egg) This is in contrast to a man’s physiology where significant numbers of sperms are produced during every ejaculation. The menstrual cycle is associated with not only changes in the reproductive organs but also changes in the breast, body fluids, the basal body temperature and other organs.

Girls begin their first period around 12 years and this is called Menarche. Menarche occurs approximately 2 years after they begin to develop breasts (thelarche). During this interval, girls experience sudden growth spurt and other bodily changes. Menarche for some girls may be as early as at eight or as late as at 16 years. There may occur an increased amount of clear vaginal discharge a few months before their first period.

The cessation of menstruation is called menopause and occurs around 50 years of age.

WHAT IS A NORMAL CYCLE?

For the ease of understanding, the normal menstrual cycle may be studied as the Menstrual Phase, Follicular (Proliferative) phase, Ovulation and the Luteal (Secretory) Phase.

Tough the typical cycle length is about 28 days; it may vary between 26 to 33 days without significant alteration in function. The flow usually lasts for 3-5 days. The estimated blood loss per cycle is between 30 to 50 milliliters.

During menstruation, the lining of the uterus (endometrium) shrinks as it is being partially shed due to withdrawal of hormones and hence insufficient blood supply.

This is the period of menstrual cycle before ovulation. It is the duration after cessation of menses and up to the 13th day of a 28-day cycle. (Approximately 10 days)It is mainly under the influence of the Follicular Stimulating Hormone (FSH) secreted in the Pituitary Gland.

It is called Follicular Phase because the follicles (tissues that house single eggs) begin to grow and develop now. It is also called proliferative because of the changes that occur in the lining of the uterus (Endometrium)

Every cycle,a group of 6-10 or more follicles begin to grow during this phase, increasing in size while simultaneously producing the important female hormone, the Estrogen. However, of all the follicles developing, only one is destined to ovulate and the rests undergo atresia. (Cell death)The follicle housing the egg, which is destined to be released in that cycle, is called the dominant follicle.

The dominant follicle can be imagined as a tiny (about 20-millimeter diameter) fluid filled tissue ball with an internal protrusion, where the precious egg is ensconced. The egg is seated on a mass of nutritious cells, surrounded by nourishing fluid! (Refer Figure 5)

Estrogen is the main hormone of the Follicular Phase and has profound effect on the endometrium. The endometrium, which was all shed off, but for its basal layer, (during menstruation), now begins to regrow under the influence of estrogen. The blood vessels, glands and tissues of the endometrium are all influenced to grow and change favorably in preparation for a fertilized egg!

Ovulation occurs at the end of the Follicular Phase.

3. OVULATION (Release of egg from the ovary)

The egg, which is released from the ovary, is picked up by the uterine tube. It stays within the tube for about 24 hours and is actually anticipating to be fertilized by a sperm! If fertilization does not occur during this time, the egg self-destructs! (This interesting phenomenon of programmed cell death or apoptosis, is also known as cellular suicide!)