Robotic Surgery and its Advantages 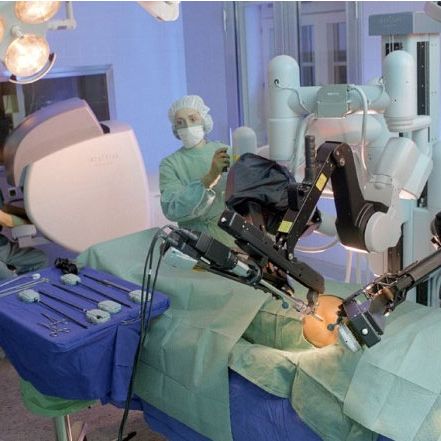 In the coming future, there shall be a revolution in the medical field. Soon, precise, complicated surgery which is currently being done by humans will be taken over by highly intelligent robotic machines! Imagine being operated upon by not a person but a machine! Doctors around the world are using sophisticated robots to perform surgical procedures on patients.
In today's operating rooms, you'll find two or three surgeons, an anesthesiologist and several nurses, all needed for even the simplest of surgeries. Most surgeries require nearly a dozen people in the room. Surgical robots will eventually eliminate the need for some personnel. In the near future, surgery may require only a single surgeon who is controlling a marvelous machine completing a task with ease which once took a crowd to achieve!

Not all surgical robots are equal. There are three different kinds of robotic surgery systems:

The main difference between each system is how involved a human surgeon must be when performing a surgical procedure. On one end of the spectrum, robots perform surgical techniques without the direct intervention of a surgeon. On the other end, doctors perform surgery with the assistance of a robot, but the doctor is doing most of the work

Robotic surgery has several advantages over conventional surgery, including enhanced precision and reduced trauma to the patient. For instance, traditional heart bypass surgery requires that the patient's chest be "cracked" open by way of a 1-foot (30.48-cm) long incision.
However, with robotic surgery, it's possible to operate on the heart by making three or four small incisions in the chest, each only about 1 centimeter in length. Because the surgeon would make these smaller incisions instead of one long one down the length of the chest, the patient would experience less pain, trauma and bleeding, which means a faster recovery.The use of robotics would also prevent surgeon fatigue. Surgeons can become exhausted during those long surgeries, and can experience hand tremors as a result.
Even the steadiest of human hands cannot match those of a surgical robot. While robotic surgery systems are still relatively uncommon, several hospitals around the world have bought robotic surgical systems. These systems have the potential to improve the safety and effectiveness of surgeries. But the systems also have some drawbacks. It's still a relatively young science and it's very expensive. Some hospitals may be holding back on adopting the technology.